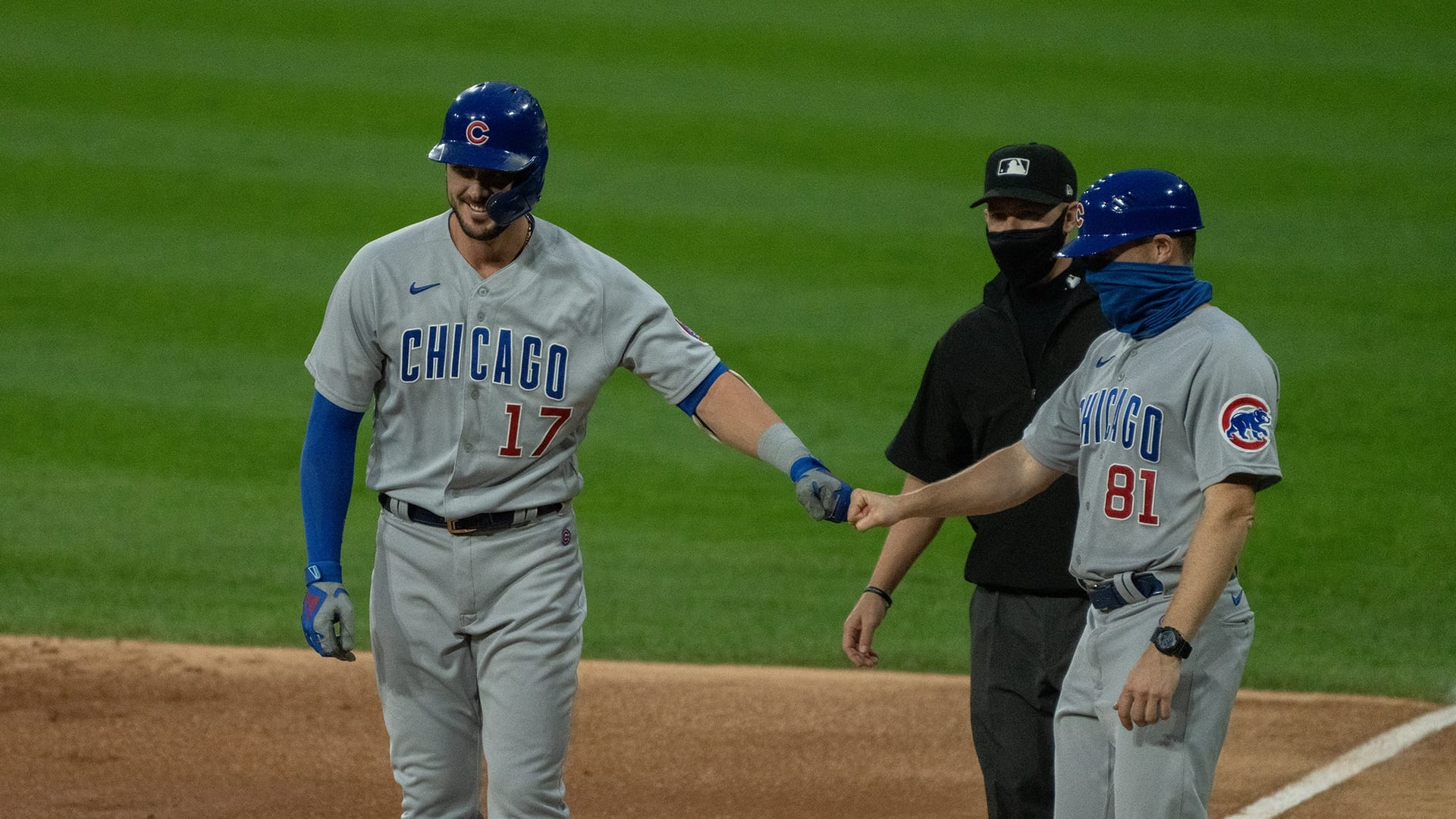 The Cubs wrapped up the 2020 season with another playoff appearance, falling to the Marlins in the NL Wild Card Series. Through all 32 home games, Marquee Sports Network’s Digital Media Manager Scott Changnon (@scottychags on Twitter) was there to capture the action through his camera lens. Here’s 58 of his best snapshots and 2 photos from Getty Images from a memorable road series in Milwaukee.

The Wrigley Field Marquee was lit on Opening Day as the Cubs took on the Brewers.

Kyle Hendricks embraces manager David Ross after handing him the game ball after the Cubs' win on Opening Day. Hendricks pitched a complete game, shutout in the Cubs 3-0 win, striking out 9 and allowing just 3 hits.

A lone foul ball sits among the seats at Wrigley Field. While there were no fans in the stands chasing a game ball, the Cubs had employees pick up the balls and mailed the balls to the season ticket holder who's seat was closest to where the ball landed.

A fan waits patiently on Sheffield Avenue for a batting practice ball to leave the stadium. While fans weren't actually in Wrigley Field, plenty of ballhawks roamed Waveland Avenue hoping to get a ball.

Fans in the Wrigley Field Rooftops enjoy a Cubs game. Fans may not have physically been in Wrigley Field, but their presence was felt across the street.

A pair of children take a break from chasing balls on Waveland Avenue to enjoy some lunch.

Javy Báez arrives at Wrigley Field ahead of the National League Wild Card Series against the Marlins.

Kyle Schwarber rides in style on a scooter to Wrigley Field before a Cubs game.

Yu Darvish and Victor Caratini leave the bullpen to head to the dugout before a game against the St. Louis Cardinals.

Yu Darvish prepares to pitch during a Cubs game at Wrigley Field. Darvish emerged as one of the best pitchers in baseball in 2020, pitching to a 2.01 ERA and a 0.961 WHIP.

Yu Darvish celebrates a strikeout against the Chicago White Sox. Darvish showed his dominance against their crosstown rival White Sox, striking out 10 in 7 innings as the Cubs won 2-1.

Kyle Hendricks prepares to pitch in a game at Wrigley Field. Hendricks gave the Cubs one of the best 1-2 punches in baseball at the top of the rotation. He pitched to a 2.88 ERA and a 0.996 WHIP.

The Cubs celebrate Alec Mills' no-hitter in Milwaukee on Sept. 13. While Hendricks and Darvish were the stalwarts of the Cubs' rotation, the best outing for a Cubs' starter came when Alec Mills recorded the 16th no-hitter in Cubs history in a 12-0 win. Mills went from a college walk-on to throwing a...

Ian Happ makes a catch in center field. Entering 2020, Ian Happ and Albert Almora Jr. were competing for the starting center field job. Happ took the job and ran with it, becoming an everyday starter for the first time in his big year.

Ian Happ hits a home run at Wrigley Field. Happ excelled for the Cubs offensively with an .866 OPS. Through Sept. 5, Happ was an MVP candidate, hitting 12 home runs and a 1.113 OPS as he moved to the leadoff spot.

Jason Heyward hits a 9th inning, go-ahead home run off Josh Hader in Milwaukee on Sept. 12. Heyward had a strong offensive showing in 2020. He had an .848 OPS and .392 OBP, his highest numbers as a Cub. Larry Radloff/Icon Sportswire via Getty Images)

Jason Heyward signals two outs to the rest of the Cubs. Heyward was as solid as ever in right field, accumulating a 3.3 Ultimate Zone Rating, per FanGraphs.

Anthony Rizzo cheers on his teammates from the Wrigley Field dugouts. Rizzo's walkup song stole the show each home game, but he showed his support for his teammates when they were up to the plate, too.

Anthony Rizzo gestures to the Cubs' dugout after a hit against the Royals. The Cubs dugout would get rowdy for his walkup song and he repaid them with a shoutout after a hit.

Kyle Schwarber crushes a home run against the White Sox. Schwarber had 11 home runs in 2020.

A teammate pumps up Kyle Schwarber in the Cubs dugout. The Cubs made their own atmosphere in their dugout and at times it was just as entertaining as they were on the field.

Kyle Schwarber, Jason Heyward and Ian Happ celebrate a Cubs win at Guaranteed Rate Field. The Cubs trio had an historic outing on Aug. 30 as they each hit 2 home runs, the first time in baseball that all three starting outfielders hit two home runs.

Jon Lester takes the mound at Wrigley Field. Jon Lester pitched 5 no-hit innings in his season debut as the Cubs beat the Reds 8-7.

Jon Lester takes the mound against the White Sox at Guaranteed Rate Field. Lester, who has a mutual option in 2021, might have pitched his final game as a Cub in this outing.

Willson Contereas celebrates a double at Wrigley Field. Contreras had 7 home runs and a .763 OPS for the Cubs in 2020.

Willson Contreras fist bumps David Ross in the Cubs dugout. Contreras shared a personal bond with his former teammate and former catcher Ross. Contreras took over from Ross as Jon Lester's catcher and has caught more innings of Lester's than Ross.

David Ross and the Cubs coaching staff watch the Cubs from the dugout. David Ross won the NL Central Division title in his first season as manager.

David Ross meets with the umpire crew prior to a game against the Pirates.

David Ross speaks to some of his relievers prior to a game. Ross showed his photogenic side, posing for the camera when he saw it pointed in his direction.

Jeremy Jeffress celebrates a strikeout and win against the Twins. Jeremy Jeffress brought stability and charisma to the Cubs bullpen and his outings were must-watch not only for his ability to notch outs, but also for his swagger that he displayed.

Rowan Wick celebrates a strikeout. Wick proved to be a reliable back-end arm for the Cubs pen, as he notched 4 saves and 5 holds in 19 outings. His season was cut short in late September when he suffered a left oblique strain and missed the rest of the year.

Craig Kimbrel prepares to deliver a pitch at Guaranteed Rate Field. Kimbrel bounced back from a tough start to 2020 with a dominant September. In 7.1 shutout innings of work, Kimbrel allowed just 3 hits and struck out 13.

Brailyn Marquez pitches in a game at Guaranteed Rate Field. Highly-touted prospect Brailyn Marquez made his big league debut in the season finale against the White Sox, pitching 0.2 innings of relief.

Adbert Alzolay pitches in a game against the Cardinals at Wrigley Field. The young Alzolay was a spot starter in 2020, splitting time at the Cubs' alternate site in South Bend, Ind. and in Chicago. He added a refined slider in September at the alternate site and it proved very effective.

Nico Hoerner tags out the Cardinals' Dylan Carlson at second base. Hoerner split time at second base with Jason Kipnis in his first full season in the bigs.

The Cubs "W" flag flies after a Cubs win.

The "W" Flag is seen from outside Wrigley Field.

The "W" flag is seen with the moon in the background.

People cross Clark Street before a Cubs-Cardinals game at Wrigley Field. Wrigleyville still saw it's share of crowds, albeit much smaller this year as fans walked the neighborhood to catch the sound of the organ or the crack of the bat from a distance.

Chairman of the Cubs, Tom Ricketts address Cubs employees at a Cubs Associate Rally for Change at Gallagher Way. Tom and Laura Ricketts, along with other Cubs associates voiced their commitment to diversity, equality and inclusion.

Sean Marshall, Len Kasper and Taylor McGregor wave to the camera from the broadcast booth.

Marquee Sports Network's Taylor McGregor prepares for a hit before a Cubs game.

Taylor McGregor rakes the Wrigley Field infield. With the number of people allowed into a Wrigley Field limited, McGregor filled in as a member of the grounds crew, giving fans a behind-the-scenes look.

Marquee Sports Network's Elise Menaker does a hit from the stands at Wrigley Field. While Menaker and Taylor McGregor were not allowed on the field, they were able to do their on-air hits from various other locations around Wrigley Field.

The Chicago Cubs pose for a team photo in front of the famous Wrigley Field scoreboard in center field.

The Wrigley Field Marquee is lit ahead of the 2020 NL Wild Card Series between the Cubs and Marlins.

The NL Central champion Cubs squared off with the upstart Marlins, who finished in second place in the NL East.

The on-deck circle is decorated with the NL Wild Card Series logo at Wrigley Field.

A fan stands outside of Wrigley Field with a sign showing his availability.

The "L" flag flies over Wrigley Field after the final Cubs game of the 2020 season.