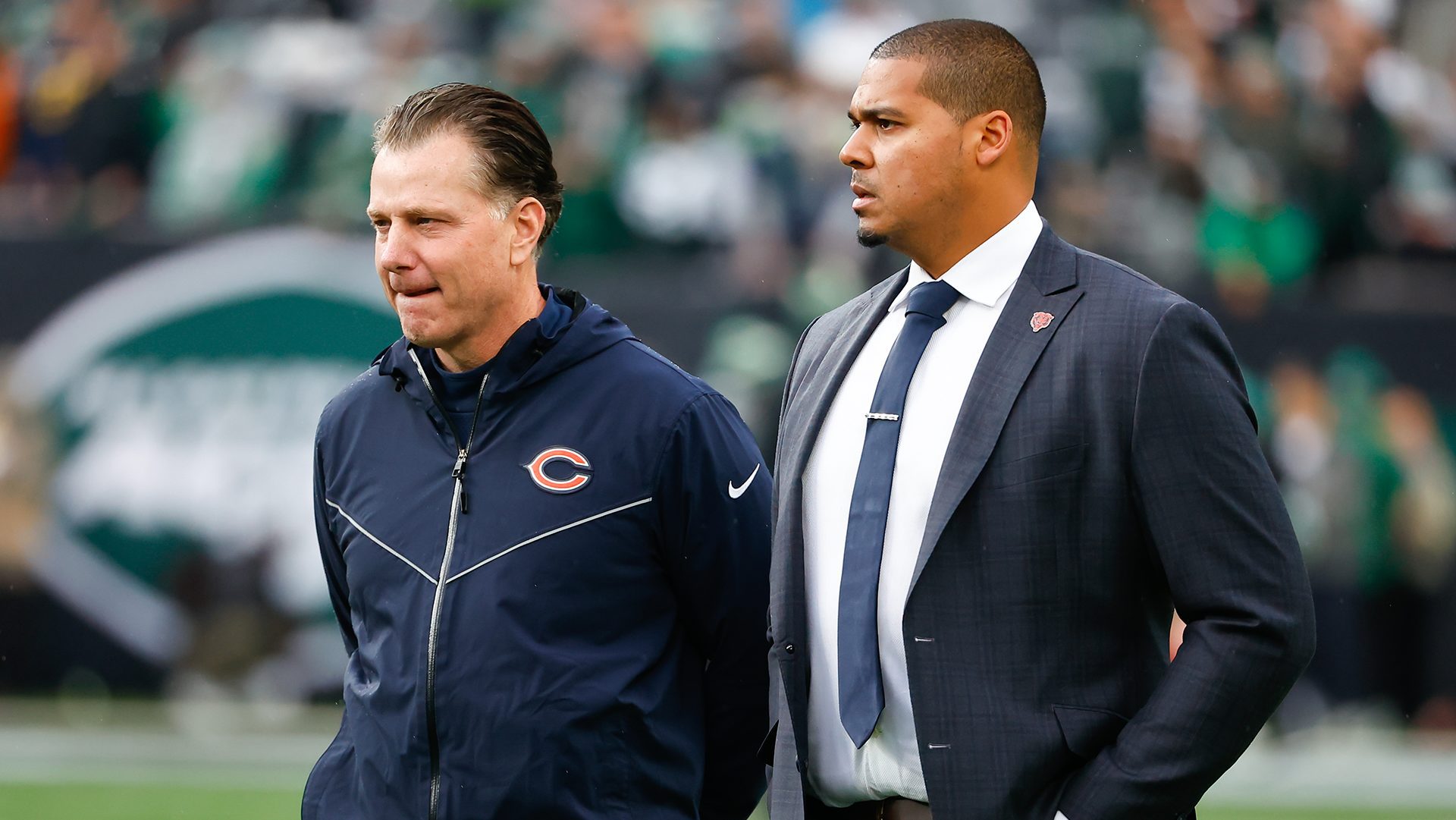 The Bears lost their fifth straight game, falling 31-10 to the Jets on Sunday at MetLife Stadium.

It marked a tough day for the Bears as they played without quarterback Justin Fields (left shoulder) and suffered some costly injuries.

Here are the five takeaways from the Bears’ loss in the Meadowlands.

Ultimately, it was curious how the Bears handled the decision in whether Justin Fields would play this game. One week after suffering a separated left shoulder – and with the pain still lingering through each throw – Fields was a game-time decision ahead of kickoff at MetLife Stadium.

But the Bears made the right call in holding Fields out of this game. Despite head coach Matt Eberflus’ desire to create gamesmanship with his team’s quarterback uncertainty, the priority had to be on protecting Fields rather than putting him at risk.

Nothing is more important to the Bears at this point in time than the continued development of the 23-year-old Fields, who has made great strides in this second NFL season. Putting him out there Sunday – facing a relentless Jets pass rush, playing in the rain and on turf – would’ve been a negligent call.

Frankly, it was surprising Fields even practiced in a limited role this past week. He wouldn’t be able to operate the Bears’ offense properly, unable to effectively lead offensive coordinator Luke Getsy’s scheme.

If the Bears had hopes that Sunday’s game could continue the progress Fields has made in 2022, that would’ve been a misguided notion. But the more paramount concern would be the health of Fields, who could suffer greater damage to this injury if put on the field.

“Of course, I’m not going to sacrifice playing in this game for me risking that I might not be able to play later in games,” Fields said last week in acknowledging the risk. “I’m not going to have to sacrifice playing in this game and now I get hurt and I have to sit out two or three more weeks after that. Again, just seeing how my body feels, listening to my body and making sure I’m not forcing anything and stuff like that. Just seeing how it goes.”

Even if the Bears were 8-3 before kickoff Sunday instead of 3-8, it would’ve been a risky proposition putting Fields out there.

Fields shouldn’t play again until he’s without risk of a more significant injury to that shoulder, medically cleared at near 100% health. Let Trevor Siemian or Nathan Peterman play as long as Fields needs to be healthy.

Fields has played through injuries throughout his football career, including playing through broken ribs during the college football playoff in January of 2021. He has been dealing with this left shoulder injury since October and perhaps even before then. Fields’ toughness earns him the respect of his team. But it also underscores how he must be protected.

The Bears did not put Fields at risk on Sunday, which was absolutely the right call.

It’s always concerning when a player suffers a non-contact injury. That was the case for Bears veteran safety Eddie Jackson, who went down while trying to break on a route over the middle.

Jackson crumbled to the turf of MetLife Stadium and immediately reached for his left foot, this as Jets wide receiver Garrett Wilson went for a 54-yard touchdown in the second quarter. The Bears quickly ruled out Jackson, though the extent of the injury wasn’t immediately clear.

It appeared to be a serious injury for Jackson, who had to be carted to the Bears’ locker room for further evaluation. It’s a disappointing deal for Jackson, who was rejuvenated this season and back at his best form.

“That player is still here,” Jackson said before the season. “That player still exists. A lot of people are writing me off personally. It’s cool. I work the best when I’m an underdog.”

Jackson embraced the fresh start and was enjoying a strong 2022 campaign. He earned the role as a captain for the Bears, had embraced being a leader for his young teammates, and was having success in the form of four interceptions. He would’ve earned Pro Bowl consideration through a full season.

The injury will draw the attention of the NFL players’ association, which has recently made a point against slit film turf playing surfaces. There’s an increased risk of injuries – and specifically non-contact injuries – on slit film turf.

MetLife Stadium is preparing to change from slit film turf to a natural surface beginning in 2023.

The Bears’ immediate concerns are with Jackson, who may be lost to a serious injury.

The injuries are piling up on these banged-up Bears. Receiver Darnell Mooney also left this game with a left ankle injury.

Mooney had his left leg rolled up during the third quarter, leaving MetLife Stadium for further evaluation and not putting any weight on his leg. The full extent of Mooney’s injury will be known later this week.

But if Mooney is forced to miss time, the Bears face concern for Fields and their hopes of continuing to evolve this offense. Mooney has become Fields’ top target and most trusted option in this offense, hauling in 40 receptions for 493 yards and two scores this season.

Fields has yet to throw for more than 300 yards in his 23 career games, the high mark being 291 passing yards last season at Pittsburgh. While the Bears have found their identity on offense through the run game, they hope for better production in the passing arsenal.

Without Mooney, Fields and the Bears will struggle to get their passing game where they hope it can go.

Since landing with the Bears earlier this month, wide receiver Chase Claypool has worked to get acclimated with this offense – and specifically the difficult route concepts.

On Sunday, Siemian and the Bears seemed to do their part to get Claypool involved with more simplified opportunities. He had two catches for 51 yards on five targets, including a 36-yard strike down the sidelines. Claypool ran a go route and made a terrific catch while being draped by Jets rookie cornerback Sauce Gardner, who was called for pass interference.

During the first quarter, Siemian targeted Claypool on a fade route in the end zone but Gardner played tight coverage and forced the pass break-up.

Claypool hopes to become a top target for the Bears as his comfort in this offense grows. But these route concepts have proven to bring a challenging adjustment for him.

Getsy and the Bears must continue to find ways to get Claypool involved, because he has the talent to make game-changing plays.

5. Light at the end of the tunnel

As the Bears (3-9) continue to struggle this season and the losses stack up, the attention will turn to next offseason.

With the Bears’ loss on Sunday and the Panthers’ 23-10 win over the Broncos, Chicago is now positioned with the second pick in the 2023 NFL Draft. The Texans (1-9-1) are slated with the top pick.

Five games remain for the Bears this season, but this team seems set with one of the top picks in the draft. With that and the most cap space of any team in the NFL for this coming offseason, the Bears face the opportunity to significantly improve for the future.

As for now, the Bears are a banged-up team that’s struggling along.