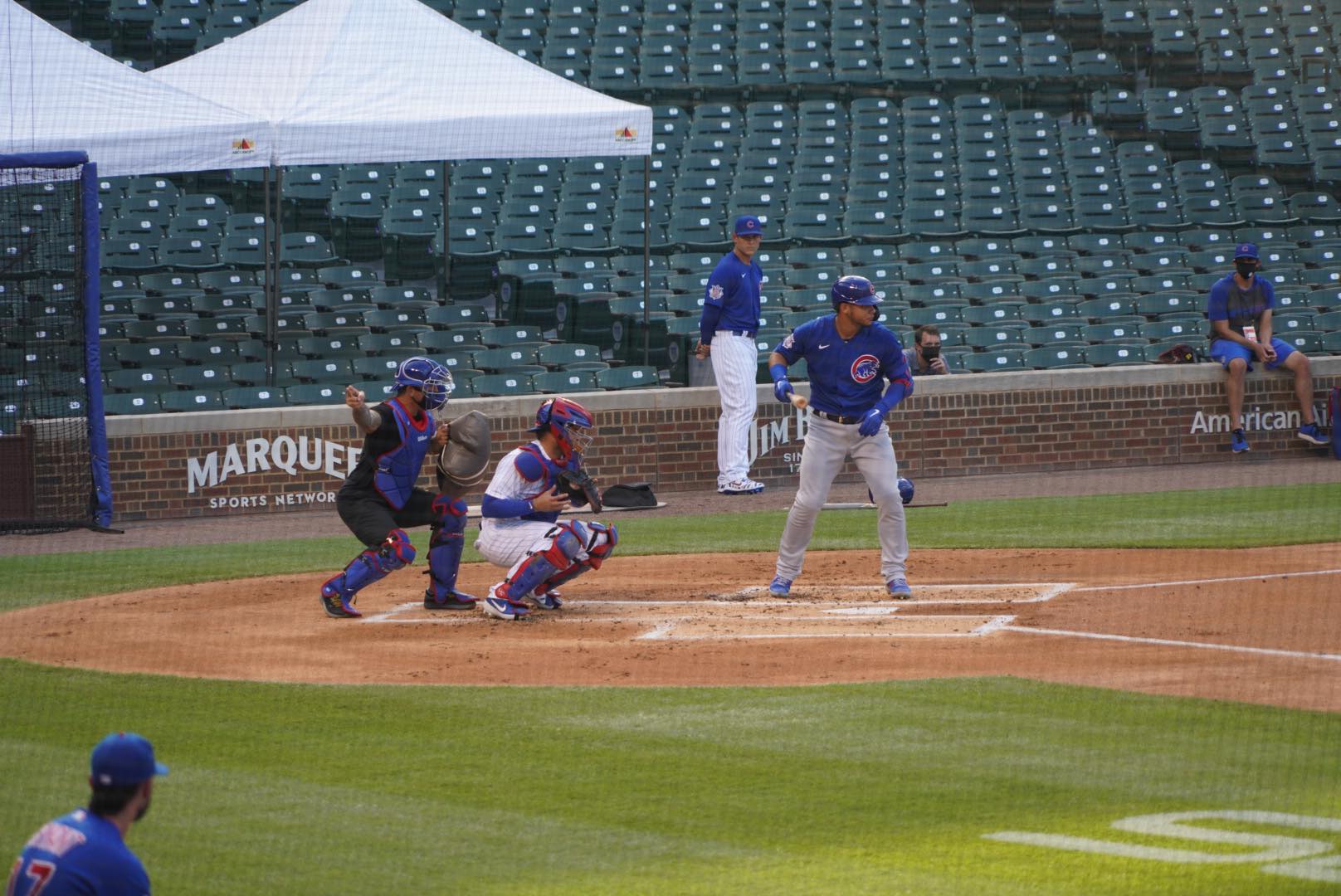 On the fourth day of intrasquad scrimmages, the Cubs had a scary moment, a hilarious moment added a new element to the simulated game and saw more of the same.

First, the scary moment: After Yu Darvish threw a breaking ball to Steven Souza Jr. in the 2nd inning, play was stopped momentarily as head trainer P.J. Mainville, pitching coach Tommy Hottovy and David Ross and catcher Víctor Caratini met on the mound for a conference. They examined Darvish’s throwing hand and after a brief discussion, all went their separate ways.

Darvish stayed in to finish the at-bat (a pop out to third base) and came back out for the 3rd inning. He had what was classified as a minor fingernail issue on his right index finger, but it’s been resolved and the team doesn’t anticipate it to be a problem moving forward.

The hilarious moment: Anthony Rizzo — who is still nursing some lower back tightness and did not participate in Thursday’s scrimmage — spent some time checking out other vantage points of Wrigley Field. In another bit of light-hearted news, the Cubs installed a new aspect of the intrasquad scrimmages — an umpire.

Mental skills coach and former catcher John Baker donned a rolled up tarp/bag and catcher’s gear and called balls and strikes throughout the affair.

Tonight I became the only man to bat, pitch, catch, and umpire Major League Baseball at Wrigley Field. https://t.co/NZ1CIGhPnq

In the previous three scrimmages, the Cubs catchers called balls and strikes.

As for the on-field performance, a lot of the offensive damage came from the usual suspects so far in summer camp — Víctor Caratini, Kyle Schwarber and Willson Contreras. All three have been swinging the bat well in the first few simulated games.

Caratini picked up the first hit of the game — a liner down the right-field line for a single — and Schwarber added a solo blast to the opposite field off Kyle Hendricks in the 4th inning to start the scoring.

Contreras supplied his 2nd homer in as many scrimmages with a mammoth shot that bounced off the left-field bleachers and onto Waveland Ave. to give the ballhawks something to fight over.

The trio of home runs accounted for most of the scoring as the visiting team ended the night 5-1 winners in a 6-inning scrimmage.

Jason Heyward picked up an RBI on a sacrifice fly to drive in Jason Kipnis, who had doubled to start the inning.

Here’s the way the two teams lined up for the evening:

Darvish pitched well, working around the fingernail issue to toss 3.1 scoreless innings (he faced an extra hitter in the 3rd inning).

Hendricks also looked in midseason form, striking out the side (Almora, Happ, Báez) in the 1st inning.

Right-handers Ryan Tepera, Rowan Wick, Casey Sadler and Trevor Megill all threw an inning each in relief. Tepera surrendered Heyward’s sacrifice fly, Wick gave up Phegley’s homer and Megill was charged with all 3 of the runs that came on Contreras’ shot.